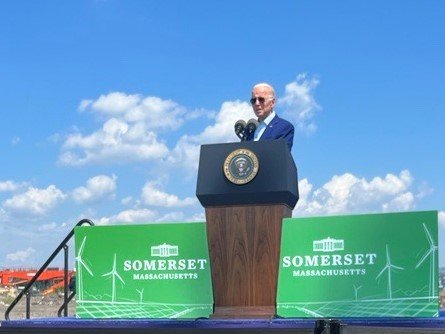 Biden announced that he would take a series of executive actions to combat climate change in the coming days. This site, formerly home to the most polluting coal fired-power plant in New England, will soon be home to one of the first offshore wind manufacturing facilities in the nation and exemplifies the hope and prosperity that can come from a renewable energy transition. Offshore wind will play a vital role in New England’s energy transition and represents an enormous opportunity for the nation, and for local communities and workers which stand to benefit from high-quality jobs.

In choosing this location for the announcement, the Biden Administration reaffirmed its commitment to the large-scale and responsible build-out of offshore wind, our region’s most abundant and effective resource to combat the climate crisis. Today, the Administration announced next steps for offshore wind leasing in the Gulf of Mexico, and are continuing to move the process forward for leasing in the Gulf of Maine in 2024.

Accelerating responsibly developed offshore wind is the single biggest action New England can take to reduce our carbon emissions and address the climate crisis, while simultaneously growing the region’s economy and creating high-quality jobs. We must urgently advance responsibly developed offshore wind and ensure its success by collaborating across states and with the federal government to drive investments in research, innovation, infrastructure, workforce development, and a domestic supply chain.