Offshore wind has widely been recognized as one of the keys to reducing greenhouse gas emissions and turning the tide on climate change—all while creating new green collar jobs. Recognizing the potential for offshore wind to jumpstart our state’s economy and help us reach our carbon reduction and clean energy goals, Connecticut has begun a significant procurement for 2,000 MW of offshore wind energy.

When President Trump pulled the United States out of the Paris Climate Accords, states like Connecticut were left to pick up the slack on our own.

In January 2018, the Governor’s Council on Climate Change—charged with devising strategies to meet the mandates of the 2008 Global Warming Solutions Action—unanimously recommended reducing Connecticut’s carbon emissions to 45% below 2001 levels by 2030. This is a new benchmark on the road to reduce our emissions to 80% below 2001’s levels by 2050.

While those goals are laudable, they were set without any plan or investment in place to make them a reality. Thankfully, the newly elected Governor Ned Lamont ran on a platform of clean energy and environmental protection—and he made realizing these goals one of his top priorities on Day One.

When Governor Lamont made his first address to a joint session of the Connecticut General Assembly, he charged them with procuring 1,000 MW of offshore wind energy. This was a significant leap forward in our clean energy procurements—but energy advocates at the Connecticut League of Conservation Voters (CTLCV) and other groups believed our state needed to think bigger.

Not only does Connecticut have significant clean energy and carbon reduction goals to meet, but we also face an aging electric grid powered in part by the Millstone Nuclear Power Plant. Millstone powers roughly one-third of Connecticut’s energy needs. Natural gas represents the bulk of the remaining two-thirds of our state’s energy use. Currently, there is no clean energy infrastructure ready to go should Millstone shut its doors—which nearly happened in March of 2019.

While Dominion Energy signed an agreement with Connecticut to keep Millstone in operation for the next ten years, our state needs to be ready with a clean energy solution to replace it. That’s why CTLCV and other clean energy advocates encouraged the Governor and lawmakers to double the proposed procurement from 1,000 MW to 2,000 MW—roughly equivalent to Millstone’s current share of Connecticut’s energy load.

Our leaders listened. At the end of the 2019 Legislative Session, the Governor Signed Public Act 19-71 into law, ordering the Department of Energy and Environmental Protection (DEEP) to procure 2,000 MW of offshore wind energy.

In addition to the actual procurement, Connecticut has also invested $93 million to redevelop State Pier in New London through a private-public partnership. This investment will upgrade the infrastructure of State Pier for the use of wind turbine generator assembly. 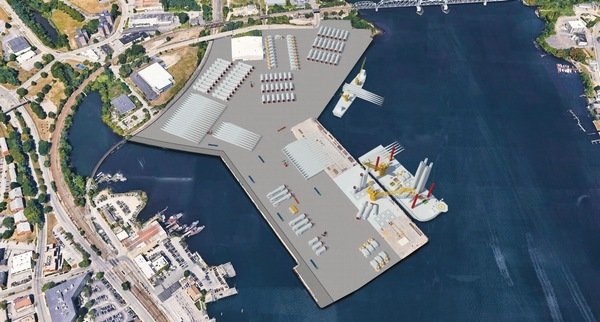 While Connecticut is still in the midst of our major 2,000 MW procurement process, we expect this investment is just the start of our state’s foray into offshore wind.

In September 2019, Gov. Lamont announced he would reconvene and expand the Governor’s Council on Climate Change. He also signed his third executive order, mandating a zero-carbon electric grid by 2040. This is an ambitious step forward for our clean energy and climate action goals. It will almost certainly require additional investment and procurements of offshore wind in the coming years.

One thing is certain, offshore wind will soon power much of Connecticut.