Each of the six New England states offers unique potential for offshore wind and plays a key role in helping our region meet its collective clean energy and decarbonization goals. While each state holds individual considerations and perspectives for offshore wind development, unity for the shared mission of responsibly advancing New England’s offshore wind potential unites them all. Cross-state dialogues help ensure regional collaboration, which is key to the responsible development of offshore wind, addressing common challenges, and accomplishment of a shared vision for the future of our green economy and regional electric grid.

Offshore wind serves as a critical clean energy resource for meeting renewable energy targets outlined in state climate legislation and decarbonization goals. Each of the New England states plays a key role in the fight to combat the climate crisis through our unique access to this abundant coastal resource. 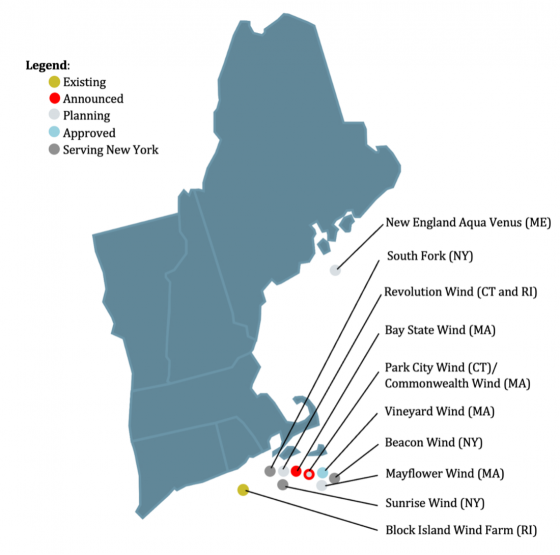 Maine’s access to the Gulf of Maine, an abundant untapped resource with over 156 GW of potential energy, makes it a top player in regional offshore wind development. Maine is currently moving forward with planning a 11 MW single floating turbine through the University of Maine for development in 2023. The state’s Governor’s Energy Office submitted an application to the federal government for the nation’s first floating research array in federal waters to study and support commercial-scale floating offshore wind and inform best practices for development. This array would allow for the long-term study of the environmental and fishing impacts of offshore wind development, and help the region adapt practices to ensure the responsible development of this growing industry. Maine is working on a floating offshore wind roadmap—an extensive, federally-funded stakeholder engagement process which will create a plan for the responsible development of the offshore wind industry in Maine and put the state on a path to achieving its energy goals.

Massachusetts is a leader in offshore wind procurements and policy, having contracted over 3,000 MW of offshore wind across 4 projects and boasting the greatest amount of offshore wind potential in the region. In 2016, it was the first state to pass offshore wind legislation, and passed a comprehensive climate bill (An Act driving clean energy and offshore wind – H 5060) in July of 2022 that includes provisions to expand offshore wind and foster an inclusive industry. The state’s access to the Gulf of Maine will allow it to advance the large-scale developments it will need to meet its climate goals.

In March 2021, Gov. Sununu signed executive order 2021-03 which ordered a number of state agencies to report on the potential greenhouse gas reduction for various levels of offshore wind development. In early 2022, two offshore wind bills passed with bipartisan support. One bill included language for requiring thorough environmental studies before approving offshore wind projects and the other focused on procurement standards and processes. This state’s proximity to the Gulf of Maine allows it a great resource for expanding its offshore wind resource.

Boasting the nation’s first, commercial-scale offshore wind farm at Block Island, Rhode Island is a leader for offshore wind development. In June 2022, Gov. McKee signed 100% Legislation (H 7277A, S 2274A), calling on the state to meet 100% of its electricity needs through clean energy resources by 2033. The same summer, the RI General Court passed S 2583, which increases required procurements by an additional 600 MW-1 GW of offshore wind capacity and resulted in Rhode Island Energy releasing a request for proposals in October 2022 for up to 1 GW of new offshore wind.